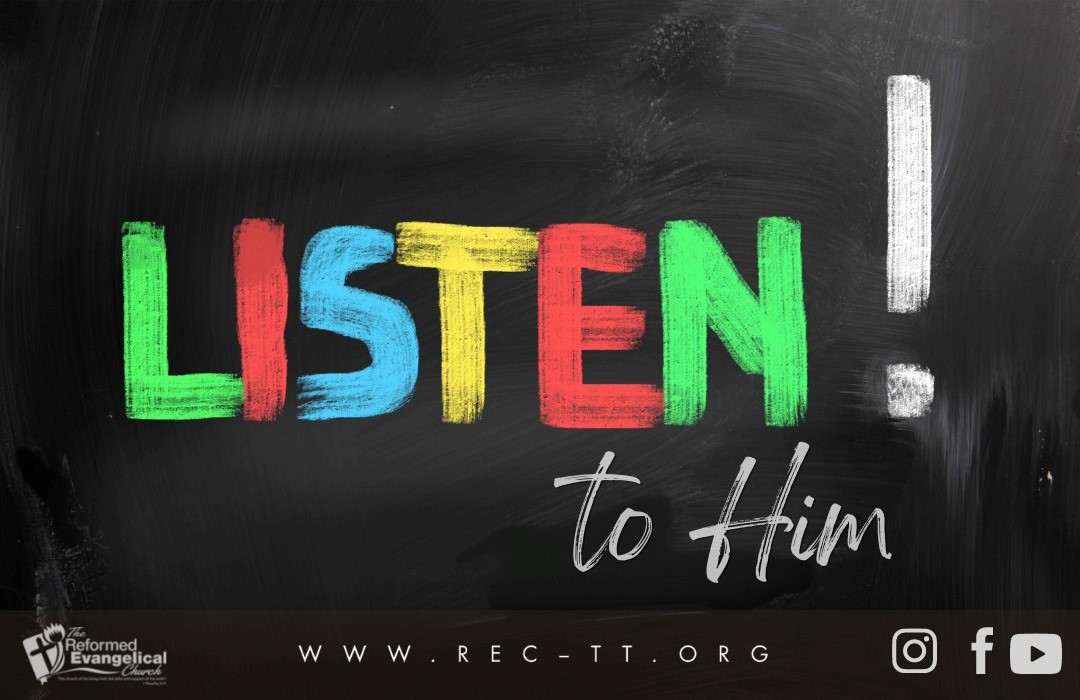 It is widely advertised that we are living in the information age. But it’s an age that seems to come with much misinformation.  Many powerful and influential voices are competing for our attention as we go about our daily lives. Modern marketing techniques have been refined to besiege and beguile our minds. We need a reliable filter to screen out the bad from the good otherwise our very lives would be in jeopardy. When the disciples of the Lord Jesus enquired about the signs of the end times, His first instruction to them was: “Don’t let anyone mislead you” (Matthew 24:4, NLT– New Living Translation)

God is not honored when His children allow themselves to be misled into wrong thinking and actions. The Lord Jesus sent out His disciples as sheep among wolves but He told them to be “shrewd as snakes and harmless as doves” (Matthew 10:16, NLT). So, how do we choose which voices to reject and which to hear? The Bible explains why and how we need to listen to Jesus Christ, who is called the Word (Gk, Logos, John 1:1, Revelation 19:13). The Apostle John went on to state emphatically, “… and the Word was God. He existed in the beginning with God” (John 1:1-2, NLT).

There are a few occasions in the Biblical record when God spoke audibly from heaven so that people could hear His voice. One such occasion occurred when Jesus was alone on a high mountain with three of His disciples – Peter, James and John. “As the men watched, Jesus’ appearance was transformed so that His face shone like the sun, and His clothes became as white as light” (Matthew 17:2, NLT). It was a brief moment when the veil was parted to give these select disciples a glimpse of the divine glory of Jesus. He is the eternal Son of God. “And now in these final days, He [the Father] has spoken to us through His Son” (Hebrews 1:2, NLT).

This vision of Jesus’ majestic glory caused much excitement among the disciples. “Peter exclaimed, ‘Lord, it’s wonderful for us to be here!’” (Matthew 17:4, NLT). He would later testify in writing, “We saw His majestic splendor with our own eyes” (2 Peter 1:16, NLT). However, the disciples’ excitement soon turned into terror. A bright cloud overshadowed them and a voice from the cloud said, “This is my dearly loved Son, who brings me great joy. Listen to Him!” (Matthew 17:5, NLT). It was a divine endorsement of the identity of Jesus from God the Father.

The incarnation of Jesus was the fulfillment of a prophecy given several centuries earlier by Moses to Israel that, “The LORD your God will raise up for you a Prophet like me from among your fellow Israelites. You must listen to Him” (Deuteronomy 18:15, NLT). When Moses delivered that important prophecy to Israel, he also reminded the people about their reaction upon hearing the voice of God after they assembled at Mount Sinai to receive the law. “You said, ‘Don’t let us hear the voice of the LORD our God anymore or see this blazing fire, for we will die’” (Deuteronomy 18:16, NLT). Sinful man cannot bear to hear the voice of God. It is noteworthy that God, who knows our weaknesses (Psalm 103:14) commended the people for their candid request to Moses. “Then the LORD said to me, ‘What they have said is right. I will raise up a Prophet like you from among their fellow Israelites’” (Deuteronomy 18:17, NLT).

It was John the Baptist who announced that Jesus of Nazareth was the promised Prophet (Messiah) who had come to speak the words of God: “For He is sent by God. He speaks God’s words, for God gave Him the Spirit without limit” (John 3:34, NLT). John went on to preach the gospel: “And anyone who believes in God’s Son has eternal life. Anyone who doesn’t obey the Son will never experience eternal life but remains under God’s angry judgement” (v. 36, NLT). Let us consider three reasons for listening to the teachings of the Lord Jesus Christ as found in the Bible.

Firstly, God’s promise to raise up a Prophet like Moses also came with the stern warning: “I will personally deal with anyone who will not listen to the messages the Prophet proclaims on my behalf” (Deuteronomy 18:19, NLT). Implicit in the command from the Father that we should listen to His Son is the requirement for total submission and obedience to His teachings. The Apostle James provides a simple analogy that reinforces the logical link between listening and obeying: “But don’t just listen to God’s word. You must do what it says. Otherwise, you are only fooling yourselves. For if you listen to the word and don’t obey, it’s like glancing at your face in a mirror. You see yourself, walk away, and forget what you look like” (James 1:22-24, NLT).

As an illustration of what the Apostle James is saying, imagine waking up from a long sleep and immediately looking at yourself in a mirror. You then remember that you have an important date to keep but, instead of addressing the condition of your face, hair, etc, you walk away from the mirror and head out to keep your date, forgetting what you saw in the mirror. You would have fooled yourself into thinking everything was in good order. There’s a good chance that your date would not start off well!

Secondly, we need to listen carefully to what the Lord Jesus says, lest we miss the message. For example, on several occasions the Lord Jesus told His disciples privately that He would be arrested and condemned to death when they arrived in Jerusalem. And yet, when it all came to pass exactly as He predicted the disciples were not prepared for it. The comments of two disappointed disciples who were traveling to the village of Emmaus explains the gap between what the Lord told them and what they wanted to hear. Even after hearing about His resurrection, they were still mourning: “We had hoped He was the Messiah who had come to rescue Israel” (Luke 24:21, NLT).

The Ligonier Study Bible has an interesting comment on the apparent confusion of Jesus’ disciples about His crucifixion and resurrection (Matthew 17:22,23): “Based on the disciples’ reaction, it appears that no one before Jesus ever identified the Messiah, the Son of Man, and the suffering Servant of the Old Testament as three titles of the one Redeemer King. The disciples are so distressed at the prospect of the Messiah’s suffering that they seem deaf to the promise of the resurrection. Even when it occurs, they do not initially believe it.”

Could it be that our failure to listen carefully to the teachings of the Lord Jesus is also the cause of the diversity of eschatological interpretations in our own time? It ought not to be so. Regarding the resurrection of all believers in Christ, the Apostle Paul reminds us: “But you aren’t in the dark about these things, dear brothers and sisters, and you won’t be surprised when the day of the Lord comes like a thief” (1 Thessalonians 5:4, NLT).

Finally, we need to listen to the Lord Jesus like a child for He has said, “I tell you the truth, anyone who doesn’t receive the kingdom of God like a child will never enter it” (Mark 10:15, NLT). Little children have nothing to give but they expect to receive everything. This attitude is essential for spiritual growth. The Apostle Peter exhorts us, “Like newborn babies, you must crave pure spiritual milk so that you will grow into a full experience of salvation” (1 Peter 2:2, NLT). The word that is translated “pure” in this verse (Greek, adolos) also means “without guile”. Listening to the words of Jesus is safe, even when they offend our own logical thinking – like, for example, the doctrine of regeneration or spiritual rebirth.

When the Lord Jesus taught the people in parables, many did not understand because of their unbelief and hardness of heart. However, in His parable of the lamp (Luke 8:16-17) we are promised that everything that is concealed will be brought into the light if our listening is disciplined. “So pay attention to how you hear. To those who listen to My teaching, more understanding will be given. But for those who are not listening, even what they think they understand will be taken away from them” (Luke 8:18, NLT).