The Salt This Decaying World Needs 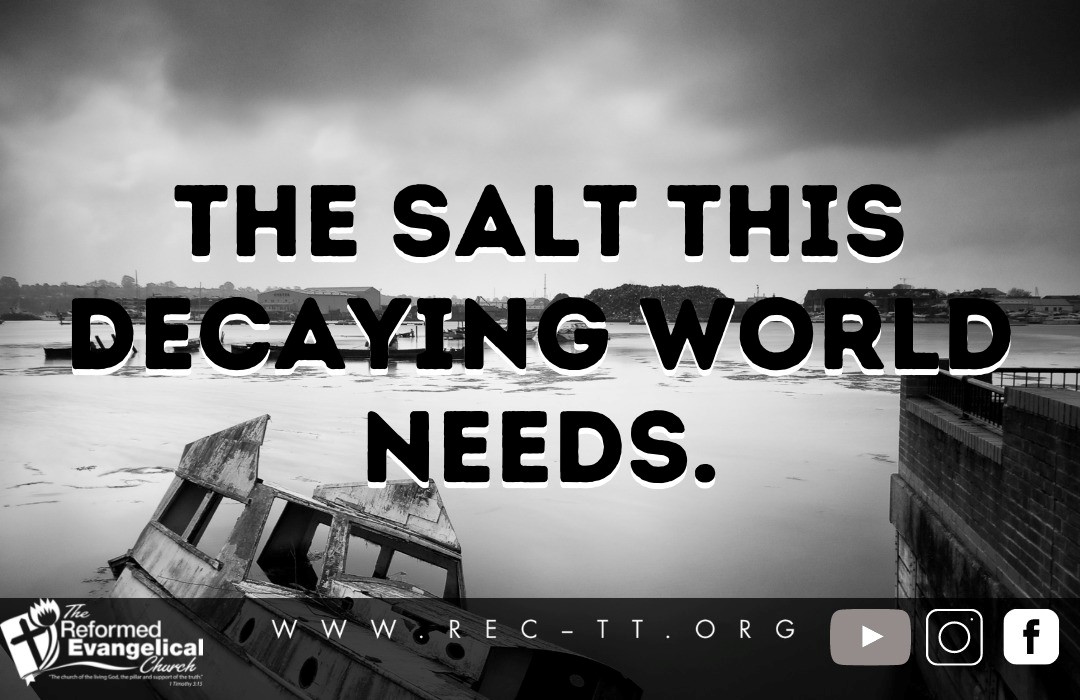 The fallen world we live in is on a path of increasing lawlessness. This increasing lawlessness can be seen, for example, in the rapid abandonment of moral principles in the western world, moral principles that were once founded upon biblical truth. The western world as we know it is morally decaying. Sins such as abortion, homosexual intercourse and the denial of the existence of God are no longer openly rejected by many in the world today.

As a result, God’s word no longer holds a sacred place in the lives of many people, not even an artificial one. This world is on a path of increasing lawlessness, and it is morally decaying. From the fall of Adam to now, man’s moral corruption because of his spiritual death due to sin has been evident. However, from the time of our Lord Jesus Christ to now, we can argue for an intensification of this moral corruption and decay as we see lawlessness increase and most people’s love growing cold (Matt 24:12).

Concerning the state of this world, Martyn Lloyd-Jones wrote, “it is fallen, sinful and bad. Its tendency is to evil and to wars. It is like meat which has a tendency to putrefy/rot [sic] and to become polluted. It is like something which can only be kept wholesome by means of a preservative or antiseptic.”[1]

The good news is that the Lord Jesus Christ, the Son of God, came into this fallen, morally corrupt, lawless and decaying world to save sinners (Matt 9:13). He is our only hope. Moreover, Jesus said to His disciples, as the Spirit of God says to His Church today, “You are the salt of the earth…” (Matt. 5:13a).

As the body of the Lord Jesus Christ, the Church stands as God’s salt in this world. In other words, if the Church ceases to be the Church the moral decay exhibited in lawlessness will exponentially increase until everything and every one stinks like rotting meat. The Church is the salt this morally decaying world needs because Christ has commissioned us to proclaim the good news of salvation to a dying world.

As the Church lives for Christ, submits to His Lordship and proclaims the gospel of salvation in His name, God saves men and draws them to Himself. Through His work of salvation, God makes those who once were spiritually dead in Adam and living in lawlessness, alive in Christ and a part of His Church (1 Cor 15:22, Acts 2:41-47).

As the Church lives in obedience to God, holding fast to His truth amid the moral decay in this world, God in His kind providence preserves this fallen world. God does this, so that through the message of the gospel preached by Christ’s Church, sinners would be called to repentance and faith and be saved from the coming judgement. It is because of God’s kindness that this entire world has not yet been destroyed and God’s kindness should lead all men to repent (Rom 2:4).

For when the Lord Jesus Christ gathers all of His lost sheep and takes His Church out of this world, then He Himself will destroy this world at His second coming (2 Peter 3:10).

The question is when Jesus comes again will you be cast away like rotting meat and thrown into the fire to be burned? Or will He receive you as one of His own people because you took Him at His word and repented of your sins and put your faith in Him to save you?

Today is the Day of Salvation, do not delay. Repent of your sins and believe in Jesus.

And you, professing Christian, what is the quality of the salt your life produces? Is it savoury or tasteless? If it is tasteless, Jesus said it is no longer good for anything except to be thrown out and trampled underfoot by men (Matt 5:13b). You, too, must repent.

May the Lord, who always leads His Church in triumph in Christ, manifest through us the sweet aroma of the knowledge of Him in every place (2 Cor 2:14).

May the Lord be pleased to keep His Church “salty”.

[1] Martin Llyod-Jones Studies in the Sermon on the Mount p. 131

The Salt This Decaying World Needs

Blessed are the Poor in Spirit