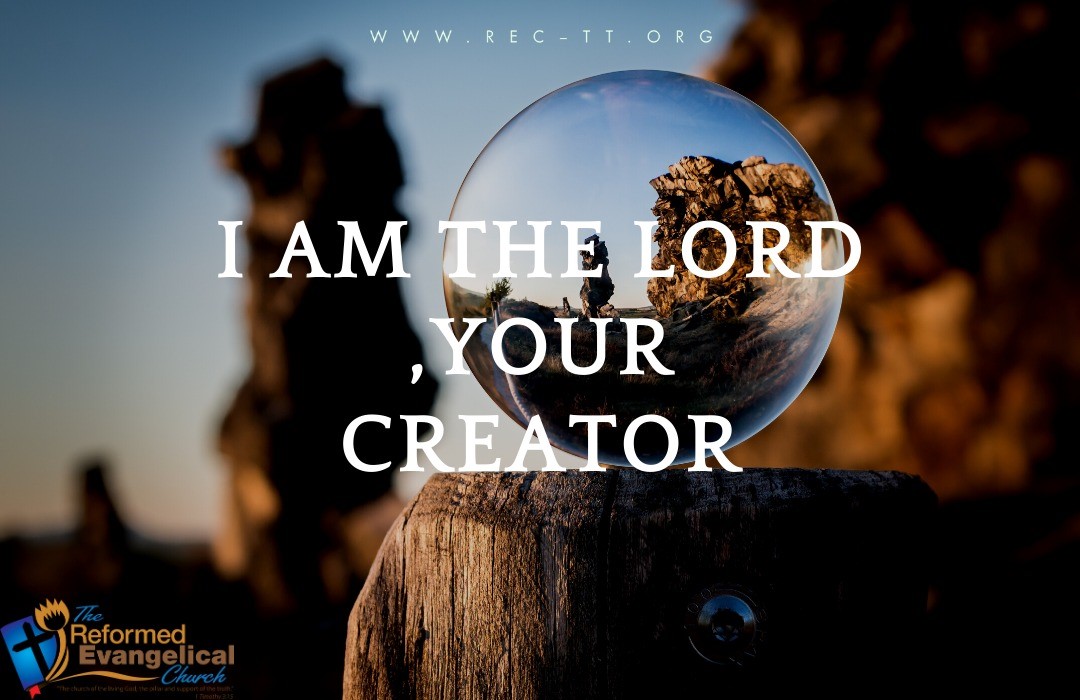 I want to begin this article by setting before you the following sampling of verses.

Psa.33:6,  “By the word of the LORD the heavens were made,  And by the breath of His mouth all their host.”

Isa.40:26, 28,  “Lift up your eyes on high  And see who has created these stars,  The One who leads forth their host by number,  He calls them all by name;  Because of the greatness of His might and  the strength of His power,  Not one of them is missing….  Do you not know?  Have you not heard?  The Everlasting God, the LORD, the Creator of the ends of the earth  Does not become weary or tired.  His understanding is inscrutable.”  (cf. Isa.37:16; 42:5).

Col.1:16,  “For by Him all things were created, both in the heavens and on earth, visible and invisible, whether thrones or dominions or rulers or authorities—all things have been created through Him and for Him. 17 He is before all things, and in Him all things hold together.”  (cf. Eph.3:9;  Heb.1:2).

Rom.1:25,  “For they exchanged the truth of God for a lie, and worshiped and served the creature rather than the Creator, who is blessed forever. Amen.” (cf.vs.20).

Rev.4:11,  “Worthy are You, our Lord and our God, to receive glory and honor and power; for You created all things, and because of Your will they existed, and were created.”

Gen.1 & 2 and the above sampling of verses make it unambiguously clear that the LORD God is the Creator.  The very first verse in the Bible declares, “In the beginning God created the heavens and the earth.”  (Gen.1:1).  Is the LORD God the Creator of the heavens and the earth?  Does the Bible teach divine special creation?  The answer is an emphatic “YES!”.  Furthermore, it must be clearly stated that the Bible does not teach evolution or theistic evolution.  There can be no reconciliation between special divine creation and atheistic or theistic evolution.  The question is  :  did God reveal to us the truth when He said that He is the Creator of the heavens and the earth and all they contain?  Or is God a liar?  If God lied then He ceases to be God.  If  Gen.1:1  is not telling literal historical truth then, through its very first statement, your whole Bible falls apart and crumbles in the dust of idolatrous pagan myths.

The Bible teaches us that in the beginning there was only God.  In the beginning there was no matter.  If matter was existing in the beginning, then matter would be eternal.  Time, space, and matter are all part of creation.  In the beginning there was only the eternal Triune God living in perfect communion.  This truth is known as the aseity of God or the self-existence of God or the independence of God.  When God created the heavens and the earth, He created ex nihilo, that is, out of nothing.  God created by His will, power, and wisdom.  To use the expression in  Rom.4:17, God called into being that which did not exist.  God spoke and it immediately happened.  God said,  “Let there be … and it was so.”  “By the word of the LORD the heavens were made.”

The Bible clearly teaches that God created the heavens and the earth in six 24-hour days.  We find in  Gen.1  the repeated statement,  “And there was evening and there was morning, one [second, third, etc.] day.”  This statement points to the end of one day and the beginning of another day.  This truth of creation in six 24-hour days is the rationale for the fourth commandment.  Exod.20:11 says, “For in six days the Lord made the heavens and the earth, the sea and all that is in them, and rested on the seventh day.”  Exod.31:17 repeated,  “for in six days the Lord made heaven and earth, but on the seventh day He ceased from labor, and was refreshed.”  There has been and will continue to be a lot of debate about the six days of creation.  The answer to such debates that cast doubt on the length of the six days is Jer.32:27,  “Behold, I am the LORD, the God of all flesh; is anything too difficult for Me?”

Creation reveals to us the true and living God who is eternal, omniscient, omnipotent, omnipresent, sovereign, and creative.  God is the sovereign Lord over creation.  And creation glorifies God through its order, structure, variety, beauty intricacy, complexity, and simplicity.  Psa.19:1  says,  “The heavens are telling of the glory of God; And their expanse is declaring the work of His hands.”  We join with the psalmist and say,  “O LORD, our Lord, How majestic is Your name in all the earth, Who have displayed Your splendor above the heavens!”  (Psa.8:1).

What must be our response to God who is the Creator?  The answer is in one word : worship.

Rev.4:11,  “Worthy are You, our Lord and our God, to receive glory and honor and power; for You created all things, and because of Your will they existed, and were created.”

Neh.9:5-6,  “O may Your glorious name be blessed
And exalted above all blessing and praise!
“You alone are the Lord.
You have made the heavens,
The heaven of heavens with all their host,
The earth and all that is on it,
The seas and all that is in them.
You give life to all of them
And the heavenly host bows down before You.”

Jer.32:17,  “Ah Lord God! Behold, You have made the heavens and the earth by Your great power and by Your outstretched arm! Nothing is too difficult for You.”

What happens when men refuse to acknowledge God as Creator?  Rom.1:20-23 gives us the answer.  They become fools and idolaters.  Paul wrote,

20 For since the creation of the world His invisible attributes, His eternal power and divine nature, have been clearly seen, being understood through what has been made, so that they are without excuse.

21 For even though they knew God, they did not honor Him as God or give thanks, but they became futile (idolatrous) in their speculations, and their foolish heart was darkened.

22 Professing to be wise, they became fools,

23 and exchanged the glory of the incorruptible God for an image in the form of corruptible man and of birds and four-footed animals and crawling creatures.

One final question  :  can a man who claims to be a Christian, denies Gen.1 is a historical account of creation, and believes in evolution, kneel before the Lord His Maker and worship God as Creator?  Worship from such a man would not be “in spirit and truth. (Jn.4:24).  That man’s worship would be insincere, untruthful, and hypocritical.  “Let God be found true, though every man be found a liar.”