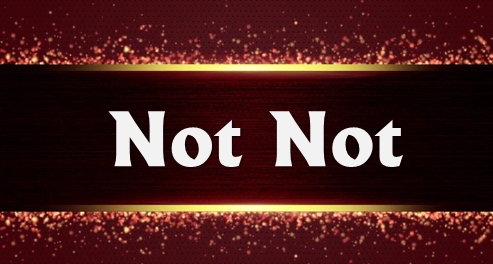 “I do not not believe in evolution.” Your first reaction to this sentence will be to correct it by removing one “not”.  You will assert that this is not correct English.  And you will be right.  However, if this statement was written in Greek, it would be correct because it would be regarded as an emphatic declaration.  The Greek New Testament has many examples of this “not not” repetition that is not necessarily made clear in the English translation.  For example,  Matt.5:20  says (literal translation),  “For I say to you that unless your righteousness surpasses beyond that of the scribes and Pharisees, you will not not enter the kingdom of heaven.”  “Not not” conveys the ideas of  “never” or  “not ever”.  Consider a couple more examples from the gospel of John, using a literal translation.

Jn.8:12,  “I am the Light of the world; he who follows Me will not not walk in the darkness, but will have the Light of life.”

The verse I want us to look at is John 10:27-28.  A literal translation is,  “My sheep hear My voice, and I know them, and they follow Me; and I give to them eternal life, and they will not not perish into the ages (or eternally); and anyone will not snatch them out of My hand.”

The words “My”, “I know”  and “I give”  are emphatic.  “My sheep”  is literally  “the sheep of the Me.”  “The Me” (My) expresses possession. Jesus is the Owner of the sheep.  “I know” will include the idea of “love”.  “Eternal life”  is salvation in its quality and in its quantity. It is never ending.

In Jn.3:16 we learn that the opposite of eternal life is to perish.  Jesus said concerning those to whom He gives eternal life, “they will not not perish into the ages” or eternally.  The promise is exceedingly emphatic.  First we have the repetition of the negative, “not not”.  Secondly, we have the repetition of the fact of eternality in the expression “into the ages” (eternally).  Jesus’ emphatic point is this – “the My sheep” will never ever to lose his / her eternal salvation and perish eternally in hell.  Spiritual decay will never ever set in and accomplish the terrible goal of causing “the My sheep” to lose his / her eternal salvation and perish.  The emphasis is on Jesus’ sheep, not on goats pretending to be sheep.

Then Jesus added,  “and anyone will not snatch them out of My hand.”  The verb  “snatch”  has the notion of violence in it and brings to mind the activities of wolves and their spiritual counterparts  (Matt.7:15; Acts 20:29).  The Christian is “My (own) sheep”.  Jesus said “I know (and love) My (own) sheep.  It is very important to note that “My sheep” is not holding Jesus’ hands.  “My sheep” is firmly held in Jesus’ omnipotent hands.  Furthermore, “My sheep”  is firmly held in the Father’s omnipotent hands and  “no one is able (has the power) to snatch them out of the Father’s (omnipotent) hands.” (vs.29)  The Good Shepherd (vs.11) and His Father are omnipotent and “the My sheep” has nothing to fear.

Now, if you do not belong to the Good Shepherd’s “My sheep”, you have everything to fear because you are facing perishing eternally in the lake of fire.  Do you want to stop fearing?  Listen to the Good Shepherd’s voice in the gospel, repent of your sins and put your trust in Him to forgive you and save you.