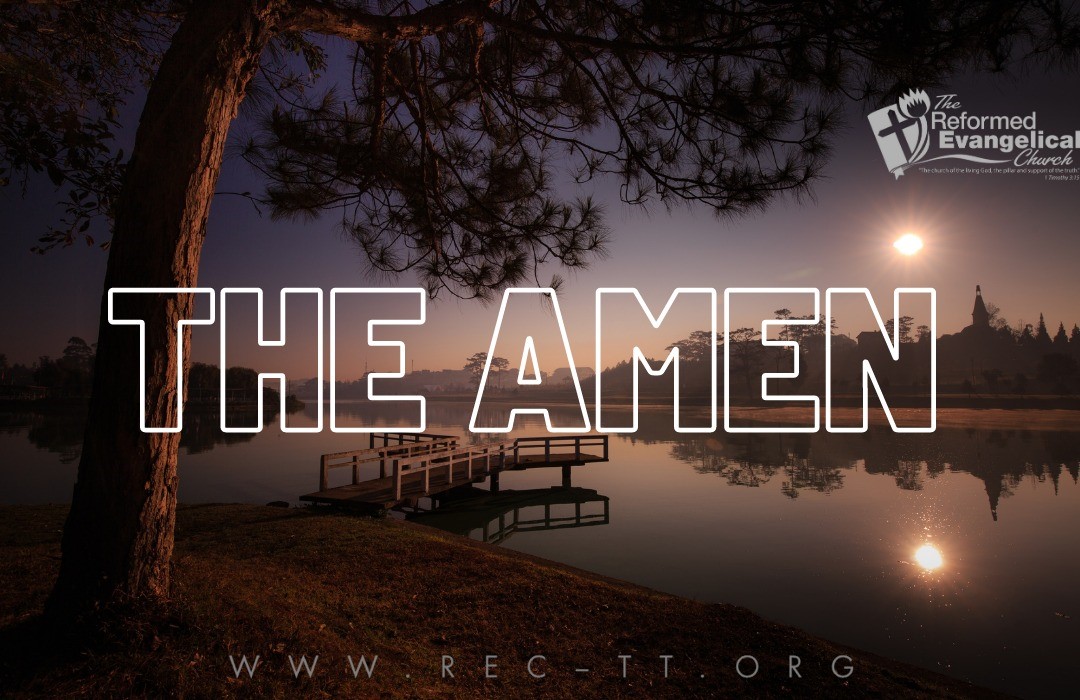 A few things caught my attention when I first visited the Reformed Evangelical Church in Auzonville Road, Tunapuna, almost ten years ago. One of them was the use of the “Amen” at the end of the hymns that were sung in the worship service. I had not seen this practiced in any of the churches I had visited before. It seemed to me that the congregation was adding a solemn agreement and confidence in the words that were sung in the hymns. It also added a feeling of reverence and awe to the worship.

Of course, I have heard Amens used profusely and profanely in other churches, sometimes as fillers during pauses in a sermon, which is a particularly cheap way of using such a rich word. After all, in its highest and purest application, Amen is the title taken by our glorious Lord Jesus unto Himself in the last of His letters to the seven churches in the Book of The Revelation of Jesus Christ. Our Lord addressed the church in Laodicea as “The Amen, the faithful and true Witness, the Beginning of the creation of God” (Revelation 3:14). At the Reformed Evangelical Church, the Amen is reserved for the end of prayers, hymns and Scripture readings. Occasionally, we may also hear it coming from the congregation when the word of truth is impressed upon the hearts of the hearers and they respond with worship.

One of the most poignant examples of God’s people using the Amen this way is found in the revival of the Jews who had returned to Jerusalem after the trauma of the Babylonian captivity. Ezra, the priest and scribe, read from the Book of the Law of Moses to an attentive and convicted gathering of these Jews “from early morning until midday” (Nehemiah 8:3). “Then Ezra blessed the LORD, the great God. And all the people answered, ‘Amen, Amen!’ while lifting up their hands; then they bowed low and worshiped the LORD with their faces to the ground” (v. 6). These people would have heard how their fathers failed to heed the warnings of God through Moses, which eventually led to their captivity. And yet, God had kept His promise not to utterly destroy but to restore them. So, the people wept and repented of their sins when they heard and understood the words of the Law. That weeping was later turned into rejoicing as they acknowledged the faithfulness of their God (vv. 9-11).

The word “Amen” is said to be one of the best known words in the languages of the world. It is transliterated directly from the Hebrew into the Greek of the New Testament, then into Latin and into English and many other languages. So, it is truly a universal word. Amen is closely related to the Hebrew verb for believe (aman), which literally means firm or faithful. So, when we read in Genesis 15:6 that Abram “believed in the Lord”, the literal translation of the Hebrew says that Abram was firm in God. We who are children of Abraham by faith in Christ (Galatians 3:7; 29) ought to reflect on what it means to believe God, like Abraham did.

When “Amen” is used with reference to God, as in Deuteronomy 7:9, His faithfulness is emphasized. Yahweh is the God who keeps His covenant, to the praise of His holy name (Psalm 89:34-36). It’s no wonder then that the Lord Jesus, the Amen, is also the faithful and true Witness in Revelation 3:14. He often used the word “Amen”, translated “verily” or “truly”, to introduce new divine revelation. In the Gospel of John, the word is repeated by our Lord for emphasis, as in John 3:3: “Truly, truly, I say to you, unless one is born again he cannot see the kingdom of God”.

So, when we say the Amen at the end of a hymn, prayer or reading of God’s word, it should not be done as an empty ritual. We are assenting that the faithful (Amen) God is able and willing to fulfill all of the great and precious promises of the Bible in Christ. “For as many as are the promises of God, in Him they are yes; therefore also through Him is our Amen to the glory of God through us” (2 Corinthians 1:20).

It is appropriate that the Bible ends with two resounding “Amens”. One is in response to the reiteration of a precious promise of our Lord; the other is in response to a final blessing from the writer of the Book of the Revelation. Both are particularly relevant for the people of God in these increasingly perilous times.

“He who testifies to these things says, ‘Surely I am coming quickly.’

Amen. Even so, come, Lord Jesus!

The grace of our Lord Jesus Christ be with you all. Amen.”

Therefore, in the final words of that great hymn, Praise to the Lord, the Almighty:

“Let the Amen sound from His people again; gladly forever adore Him”.