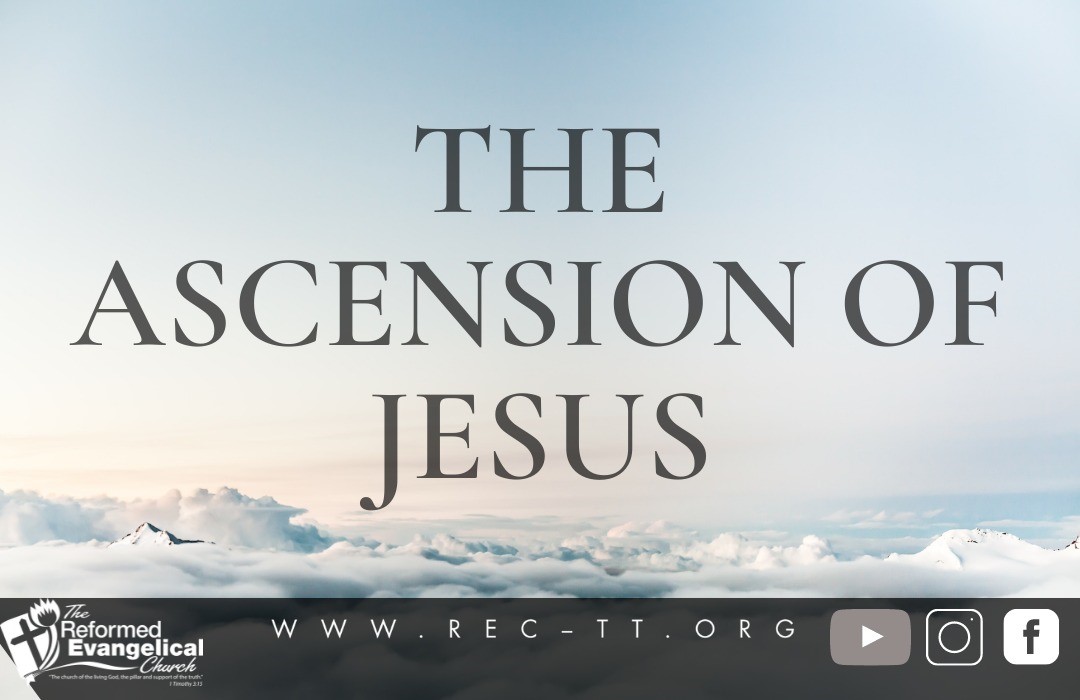 In Acts 1 Luke tell us that after Jesus rose from the dead, He appeared to His disciples several times over a period of forty days.  Luke said Jesus “presented Himself alive … by many convincing proofs.”  (vs.3).  After His resurrection Jesus was not a spirit being but a real “flesh and bones” person.  This is clearly seen in Lk.24:36-43 where we are told Jesus ate a piece of fish.  You would note in vs.2 Luke calls Jesus’ disciples “the apostles”.  On this fortieth day Jesus would appear to the apostles for the last time.  Firstly, Jesus promised His apostles that they “will be baptized in the Holy Spirit not many days from now.” (vs.5).  That promise was fulfilled on the day of Pentecost.

Secondly, Jesus told His apostles in vs.8, “you will receive power when the Holy Spirit has come upon you; and you shall be My witnesses both in Jerusalem, and in all Judea and Samaria, and even to the remotest part of the earth.”  This is a more detailed expression of the Great Commission.  The work of the Great Commission cannot be carried out by human power.  This great work can only be carried out in the power of the Holy Spirit.  Paul puts it this way in  1Cor.2:4-5,  “my message and my preaching were not in persuasive words of wisdom, but in demonstration of the Spirit and of power, 5 so that your faith would not rest on the wisdom of men, but on the power of God.”

Then Luke told us in vss.9-11, “And after He had said these things, He was lifted up while they were looking on, and a cloud received Him out of their sight. 10 And as they were gazing intently into the sky while He was going, behold, two men in white clothing stood beside them. 11 They also said, “Men of Galilee, why do you stand looking into the sky? This Jesus, who has been taken up from you into heaven, will come in just the same way as you have watched Him go into heaven.”  Jesus was lifted up into the heavens in bodily form.  The apostles and those present watched Jesus go up and out of their sight after entering a cloud.

What is the importance of the ascension and what can we learn from it?  Firstly, we must note that Luke underscored the unique status of the apostles as eyewitnesses to the ascension of Jesus.  Vs.9 says, “while they were looking.”  Vs.10 says, “they were gazing intently into the sky.”  In vs.11 the two men asked, “Men of Galilee, why do you stand gazing into the sky?”  This coincides with another emphasis in Acts, namely, about the apostles being eyewitnesses to the resurrection.  In Acts 2:32 Peter said, “This Jesus God raised up again, to which we are all witnesses.”  In Acts 3:15 Peter told the Sanhedrin Council, “You put to death the Prince of life, the one whom God raised from the dead, a fact to which we are witnesses.”  (see also Acts 10:40-41; 13:30-31).

The point I want you to note is that Jesus’ existence did not begin with His incarnation.  Jesus had a prior existence in heaven and came down from heaven to be born into this world.  Jesus came from a heavenly eternal existence into an earthly existence.  John the Baptist said, “After me comes a Man who has a higher rank than I, for He existed before me.”  (Jn.1:30).  John set for us the context of this truth when he wrote in Jn.1:1 & 14,  “In the beginning was the Word, and the Word was with God, and the Word was God….  And the Word became flesh, and dwelt among us.”  The Word, the Lord Jesus, who is eternal, who is God, and who is the Creator of all things (vs.3), entered time as a flesh and blood human being and took up residence with us.

The Lord Jesus did not come into this world by His own will.  He came into this world because it was His Father’s will.  The Father sent His only begotten (or one-of-a-kind) Son into this world.  The apostle Paul wrote in Gal.4:4-5, “But when the fullness of the time came, God sent forth His Son, born of a woman, born under the Law, 5 so that He might redeem those who were under the Law, that we might receive the adoption as sons.”  There are several verses in the gospel of John that tell us that God sent Jesus into this world.  But I want to turn your attention to the Lord’s high priestly prayer in Jn.17.  The Lord said as He prayed  :  vs.18, “You sent Me into the world.”  Vs.21, “so that the world may believe that You sent Me.” Vs.23, “so that the world may know that You sent Me.” Vs.25, “O righteous Father … these have known that You sent Me.”

Thirdly, the ascension of the Lord Jesus signaled to us the end and success of His earthly ministry.  In Jn.4:34 Jesus said, “My food is to do the will of Him who sent Me and to accomplish His work.”  In Jn.17:4 Jesus said to His Father, “I glorified You on the earth, having accomplished the work which You have given Me to do.”

Now I want you to note the connection between vs.4 and vs.5.  In vs.5  Jesus said, “Now, Father, glorify Me together with Yourself, with the glory which I had with You before the world was.”  We emphasize the fact of Jesus praying to be restored to His eternal glory in heaven.  But we miss the unspoken factor  :  with the completion of His work on the earth, vs.5 was also a prayer for Jesus’ ascension into heaven.  It is only as Jesus ascended to where He had descended from that He would be restored to the glory He had with His Father before the world was.

Fourthly, the ascension symbolized for us Jesus’ exaltation by the Father.  Having perfectly accomplished on earth the work His Father gave Him to do, Jesus has been received up in honor, seated at the right hand of the Father, and given the name that is above all names.  In Acts 2:32-33  Peter said, “This Jesus God raised up again, to which we are all witnesses. 33 Therefore having been exalted to the right hand of God, and having received from the Father the promise of the Holy Spirit, He has poured forth this which you both see and hear.”  (See also  Acts 5:30-32;  Eph.1:19b-23;  Phil.2:9-11).

Fifthly, the ascension and exaltation of Jesus is linked with two other truths.  Firstly, in Jn.16:5-7 Jesus said to His disciples, “But now I am going to Him who sent Me; …. 7 But I tell you the truth, it is to your advantage that I go away; for if I do not go away, the Helper will not come to you; but if I go, I will send Him to you.”  The Helper is the Holy Spirit.  The fulfillment of this promise is seen in Acts 2:33. Secondly, our ascended, exalted, and glorified Lord is continually interceding for us before His Father. Rom.8:34  says, “who is the one who condemns? Christ Jesus is He who died, yes, rather who was raised, who is at the right hand of God, who also intercedes for us.”  Heb.7:25 says, “Therefore He is able also to save forever those who draw near to God through Him, since He always lives to make intercession for them.”  Jesus did not return to heaven after His earthly ministry “to take a break” from His role as the eternal Shepherd of His people.  His care for His redeemed people will never be finished until we are all glorified with Him, until we share in His glory.

Lastly, Jesus’ ascension is intimately connected to His second coming.  The angels said, “This Jesus, who has been taken up from you into heaven, will come in just the same way as you have watched Him go into heaven.”  Jesus had promised His disciples in Jn.14:3, “If I go … I will come again.”  Now, Jesus, having left, the angels assured the disciples that Jesus’ ascension is a guarantee that Jesus will return in the same manner in which He ascended into heaven.

While they watched, Jesus rose bodily into the heavens and disappeared in the clouds.  When Jesus returns, He will be returning in bodily form with clouds.  In Matt.26:64 Jesus told the Jewish high priest, “hereafter you will see the Son of Man sitting at the right hand of power, and coming on the clouds of heaven.”  In Rev.1:7 we read, “Behold, He is coming with the clouds, and every eye will see Him, even those who pierced Him; and all the tribes of the earth will mourn over Him. So it is to be. Amen.”  The disciples saw Jesus ascend into heaven.  The whole world will see Jesus returning from heaven to this earth a second time.

Historians tell us that the approximate date of Jesus’ ascension is May14, 33.  Just about 2,000 years have passed since Jesus’ ascension.  And many could ask the question heretics were asking during the ministry of the apostle Peter, “Where is the promise of His coming?”  (2Pet.3:4).  Jesus kept His promise and came the first time.  And He has promised to return.  Yes, He has not returned as yet.  No one knows the day or hour of His return.  (Matt.24:36).  But this we know for certain  :  we are 2000 years closer to Jesus’ return to this earth.  Are you ready for His return?  It is of eternal importance that you be ready because He is coming as the triumphant King of kings to pour out judgment on this earth and usher in the day of final judgment.