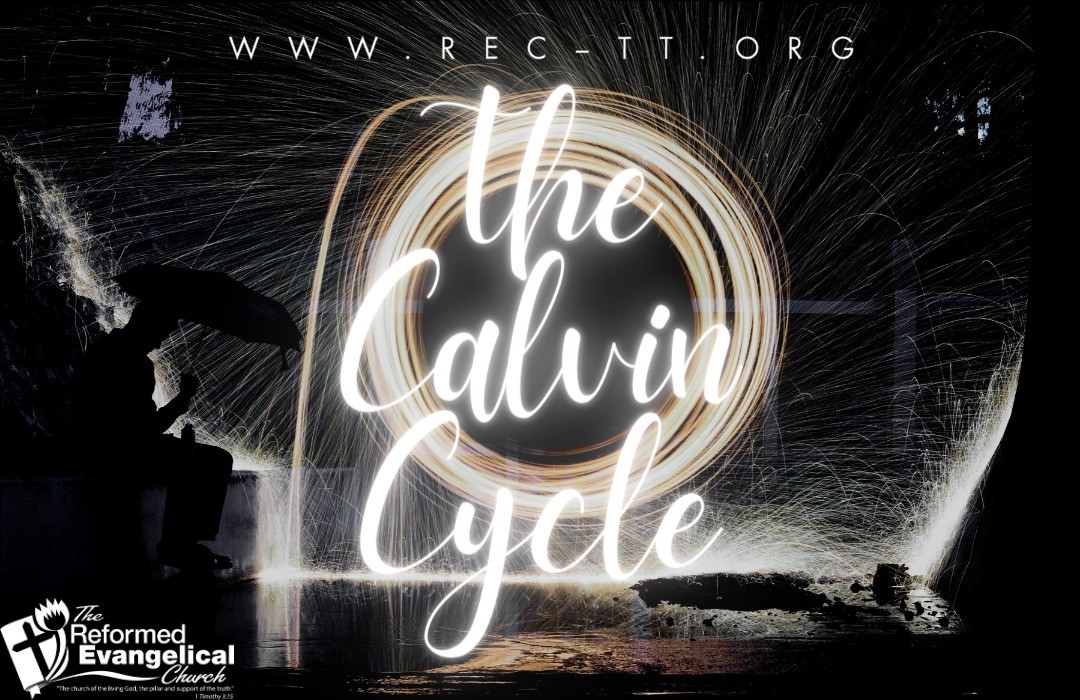 To the zealous theologians who may have been drawn to the topic of this article, I need to state immediately that it has nothing to do with our beloved Reformed theologian, John Calvin. And yet, it has everything to do with what John Calvin described as, “this skillful ordering of the universe [that] is for us a sort of mirror in which we can contemplate God, who is otherwise invisible” (Institutes, I. v. 1.). How we respond to this knowledge of the general revelation of God in creation can have eternal consequences. The Calvin cycle in plants is just one amazing example of our Creator’s wisdom, power and love that we should not ignore.

We get much of our energy from eating the carbohydrates that are found in vegetables, grains and fruits. Carbohydrates are the sugars, starches and fibers that are found in these products of plants. They comprise an important food group for humans and animals. The Calvin cycle is that amazing chemical process by which plants convert inorganic carbon dioxide from the air into complex organic compounds (carbohydrates) that are beneficial to the people and animals that feed on them. Each carbohydrate molecule has a backbone of six carbon atoms. The carbon atoms used to build carbohydrate molecules comes from carbon dioxide, the gas that humans and animals exhale with each breath.

The process is named after Melvin Calvin who mapped out the reactions in the cycle in his research at the University of Berkeley. Sometimes, it is called the Calvin-Benson cycle, in recognition of Andrew Benson who assisted in the research. It has been described as nature’s smallest cycle. Every living thing on Earth depends on the Calvin cycle because plants are the producers in the food chain, having the ability to create and store their own energy. We have access to this energy when we eat plant matter, such as rice and cassava, or the animals that consume plants. Therefore, plants form the base of the energy pyramid in the food chain.

Most of us may have heard of photosynthesis in plants. The Calvin cycle is also sometimes referred to as the light-independent reactions of photosynthesis, since it is not powered directly by energy from the Sun. Instead, the Calvin cycle is powered by products of the initial light-dependent reactions in photosynthesis. The cycle consists of three stages: carbon fixation or assimilation, reduction and regeneration. The fact that the chemical reactions comprise a cycle and are not a linear process is significant because this makes the process very efficient and self-sustaining. Note also that it converts a toxic gas (carbon dioxide) into a necessary food (carbohydrate) for humans and animals.

However, the purpose of this article is not to delve into the technical details of the chemical reactions that make up the three stages of the Calvin cycle. Rather, I am proposing that readers will take the time to pause and appreciate the power and wisdom of our great Creator. Short YouTube videos are available online that delve into the science and explain the cycle in plain language. There is a real blessing in studying God’s marvelous works in His creation. Psalm 111:2 (NLT) reads,

“How amazing are the deeds of the LORD!

All who delight in Him should ponder them.”

The psalmist is here referring specifically to the redemptive works of God in the exodus of His people from the bondage of Egypt. But it could easily be referring also to the creative works of God. The clear purpose of Psalm 111 is to lead us to the fear of the Lord and obedience to His commandments (v. 10).

Here is a challenge to all readers, especially the younger ones who are constantly bombarded with the fake science of the theory of evolution. Firstly, do your own research into the Calvin cycle. Notice that there is no possibility of the process “evolving”. All three stages of the cycle need to be functioning from the beginning of creation. Secondly, ask yourself if this is not clear evidence of an awesome Creator whom you ought to praise and worship. If this is not the response of your heart, then you need to know that you are grouped with those who “suppress the truth in unrighteousness”, according to Romans 1:18. This Scripture warns that “the wrath of God is revealed against all ungodliness and unrighteousness” of those who are able to see the truth of God and then go on to suppress that truth. The original Greek word (katecho) used by the Apostle Paul describes a deliberate smothering and rejection of the truth.

How is God’s wrath revealed, even in this present time? The Apostle Paul outlines the frightening downward spiral of ungodly men who are “hopelessly confused” (Ephesians 4:17, NLT). Five steps are identified: 1) their understanding becomes darkened; 2) their heart becomes hardened; 3) they become filled with ignorance; 4) they become alienated from the life of God that is in Christ; and, 5) they become callous, given over to sensuality and impurity. We have seen this pattern of decline in moral and spiritual values throughout the history of man. Western nations are now in the later stages of this encounter with the wrath of God as they hasten to return to their pagan roots. It all begins with a rejection of the truth of God as revealed in His creation (general revelation) and His Word (special revelation).

This is a warning to all who have eyes to see and ears to hear the truth of God: “Today when you hear His voice, don’t harden your hearts as Israel did when they rebelled” (Hebrews 3:15, NLT).

Maybe you took up my challenge to research the Calvin cycle for yourself. I believe you would have been impressed, like I was, with the mathematical precision of a process that provides, perhaps, the most important food group (carbohydrates) in our daily diet. In studying this, I should point out that you would have gotten just a glimpse of God’s power and wisdom. I hope that you want to know more. Then you need look now to the One who personifies these divine attributes. 1 Corinthians 1:24, (NLT) tells us that “Christ is the power of God and the wisdom of God”.