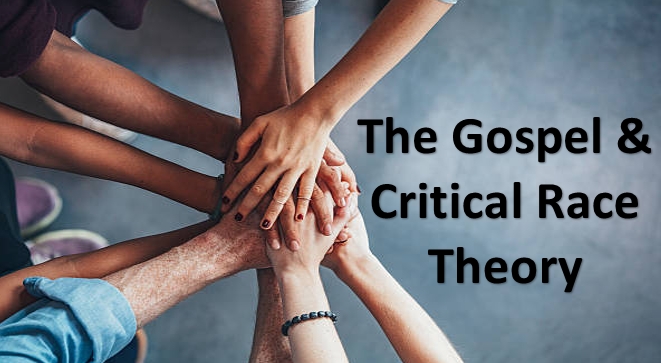 [The following is a biblical response to the threat of critical race theory/ social justice to the gospel. It is a threat because many Christians have been seduced by the deceptive teachings of this theory and are forgetting that the gospel is the power of God for salvation (Rom. 1:16) and that those who propose another “gospel" place themselves under a divine ban (Gal.1:8-9).]

Since our first parents' rejection of God and His word in the garden and their futile attempt to be right with God on their own terms, mankind has experienced nothing but physical and spiritual misery, chaos, heartache and death. In Proverbs 14:12 we are told that "there is a way that seems right to a man but its end is the way of death". We can juxtapose this verse with Jesus' statement that He is the way, the truth, and the life and that it is in Him that we have eternal life (John. 14:6).

A cursory look at the history of mankind’s attempts to be independent of God throughout the millennia will show how God has fulfilled His promise to our first parents. This article is not a history of the failed 'isms and ologies" that man has devised to fix a ruined world but to highlight the danger of the latest attempt to deal with the injustices that we see around us.

This attempt is another offspring of the secular humanist agenda that unfortunately undiscerning Christians have embraced. This agenda proposes to bring liberation to those oppressed and to defend the rights of such people, but as we will see, this is nothing more than the doctrine of demons (1Tim.4:1).

What is this critical race theory/ social justice model? And how is it antithetical to the gospel? It is an ideology that explains and confronts the power structures in society. It's two underpinnings are that mankind can be divided into two main groups : (1) those who possess power (oppressor) and those who don't (oppressed); (2) those who belong to the oppressor group will always take advantage of the oppressed either directly or more commonly through institutions and systems (hence the term structural and systemic racism) What determines who belongs to these groups? This is done by group identity, ethnicity, gender, religion immigration status, income, sexual orientation and gender identity. This is not an exhaustive list. These are subsets of the two main groups.

However, it is not as rigid as this. There is a level of interconnectivity between the two groups so that a person can belong to both an oppressor and oppressed group. This is called “intersectionality”. For example, black and white Christian women belong to the same oppressed group (woman) and the oppressor group (Christianity). But the Christian black woman is more oppressed than her Christian white sister because of ethnicity. In the critical race theory (C.R.T) the quintessential oppressor is the Christian white high income heterosexual male, and the opposite of that will be the atheistic black low income homosexual or gender fluid female.

Furthermore, she can't be corrected by the man who belongs to the supreme oppressor class even when she is wrong because he has no moral authority to do so. This is the reason for the held view that no one from the oppressor class can speak for anyone in the oppressed group.

Those who belong to the oppressor class can become "liberated" (“woke”) and gain moral authority by acknowledging that they belong to the oppressor class and are willing to surrender their power to the oppressed. This in a nutshell is the social justice theory. Unfortunately some Christians have been duped into embracing this teaching. They incorrectly surmise that because the Bible denounces the abuse of those who are disadvantaged, they can readily work with social justice advocates. They also reason, incorrectly, that these social justice advocates work for equity and fair play. These Christians are either unaware or are willing to make a compromise with those who peddle a deadly poison, one that will send its buyers straight to hell.

Christians must understand that the CRT view of humanity is unbiblical because the foundation upon which the theory is constructed is Marxist in origin. In Marxism there is no place for the God of the Bible. But if the root is rotten to its core then its fruit will be no different (Matt.7:18).

Unlike CRT, the Bible does not divide humanity into groups of the oppressed and the oppressor. The bible teaches that each individual is created in the image and likeness of God (Gen.1:27).  For this reason each person is endowed with an intrinsic value that is not ruined even by sin (Psa.8:5-6). In God's eyes we are all equal. Equal in fallenness, equally guilty, equally deserving of His righteous wrath and are equally able to receive from His gracious hand grace and mercy.

Not only is the CRT view of humanity unbiblical but its concept of sin is as well. Sin is simply the oppression of the vulnerable and the disadvantaged in the social justice model. The Bible defines sin as any failure to conform to the moral law of God in act, attitude or nature. This renders all of mankind as sinners and guilty before God (Rom.3:23; 5:12)

The true oppressor of mankind is not the privileged few but sin. We are all slaves to sin apart from Christ Jesus (Rom.6:17). As children of the devil we are ensnared by him to do his will (2Tim.2:26). We love darkness rather than light (John.3:19). We are sinners by our very nature. We are hostile to God. We will not and cannot submit to God's law and we cannot please God (Rom.8:5-8). Despite our fallen condition we still have the moral responsibility to obey God. The thrice holy God (Isa.6:3) will give no "bligh" to anyone based on group identity or power structure. Therefore, unless man repents of his sin and believes in Jesus Christ who is the only Saviour God has appointed to save fallen man, there is coming a day of reckoning, a great and terrible day of dread. On that day the righteous God will judge the living and the dead (Acts. 10:42, 2Cor.5:10).

Salvation is not becoming “woke” but by each sinner recognizing that he is in the hands of a holy angry God. He must turn from his sins and come to Jesus in saving faith. Then and only then is he set free and is truly liberated. Christ who is the propitiation for sin promises us forgiveness through the shedding of his blood and eternal life (1Jn.4:10; Heb. 9:22; John 6:40; 17:3).

The salvation that God gives through his Son is eternal and not temporal like that of the social justice theory. This theory still leaves its adherents spiritually dead and in bondage to sin and candidates for eternal destruction.

Dear Christian who has "swallowed" this social justice tablet, have you forgotten that the gospel revealed in Scripture is God's power for salvation? God has never promised to save anyone apart from the gospel. Does that mean that the Christian must turn a blind eye to the injustices in society? May it never be! Because we live in a fallen world we expect to see injustice and as God's people we are duty bound to denounce it. But we must do so in accordance with God's word and not by the wisdom of man. We are required by God to show no partiality to rich or poor (Lev.19:15, Deut.16:19, Prov.24;23, Exod.23:3; Jas. 2:9). The social justice movement shows partiality to the "oppressed" even when they are wrong and that is contrary to Scripture. Remember dear Christian that we have a more excellent message, one that offers hope and life not only for today but for all eternity.

The Gospel & Critical Race Theory
[The following is a biblical response to the threat of critical race theory/ social justice to the
gospel. It is a threat because many Christians have been seduced by the deceptive teachings of
Tweet
Tweet