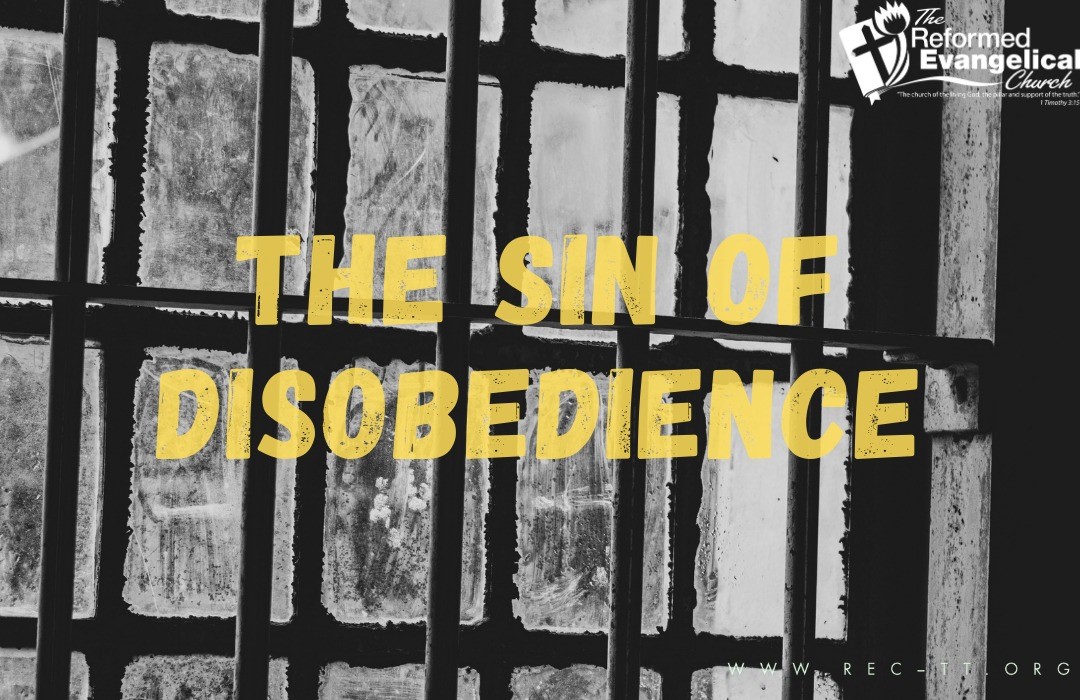 “Has the Lord as much delight in burnt offerings and sacrifices
As in obeying the voice of the Lord?
Behold, to obey is better than sacrifice,
And to heed than the fat of rams.
23 “For rebellion is as the sin of divination,
And insubordination is as iniquity and idolatry.
Because you have rejected the word of the Lord,
He has also rejected you from being king.”

The context of these verses begins with verse 1 of chapter 15.  The LORD sent the prophet Samuel with a command for King Saul.  The command was,  “go and strike Amalek and utterly destroy all that he has, and do not spare him; but put to death both man and woman, child and infant, ox and sheep, camel and donkey.”  (vs.3).  The verb  “utterly destroy”  is the Hebrew  haram  which is related to herem and tells us that the Amalekites were anathema or devoted to destruction.  Anyone or anything that God devotes to destruction must be utterly destroy, without exception.  You are NOT allowed to take anything for yourself.

Saul and his Israelite army came and attacked the Amalekites.  Vs.7  says,  “So Saul defeated the Amalekites.”  But we are told in  vss.8-9  that Saul  “captured Agag the king of the Amalekites alive, and utterly destroyed all the people with the edge of the sword. 9 But Saul and the people spared Agag and the best of the sheep, the oxen, the fatlings, the lambs, and all that was good, and were not willing to destroy them utterly; but everything despised and worthless, that they utterly destroyed.”  Note the clear emphasis in  vs.9,  “But Saul and the people spared”,  that is, they disobeyed the LORD.  The primary meaning of the Hebrew verb translated  “willing” is to be positively inclined to respond to authority.  Saul and the people  “were not willing”  to respond positively to the LORD’S authority.

The LORD sent Samuel to confront Saul’s disobedience.  We are told in  vs.13  that when Samuel came to Saul,  “Saul said to him, “Blessed are you of the Lord! I have carried out the command of the Lord.”  But Samuel replied,  “What then is this bleating of the sheep in my ears, and the lowing of the oxen which I hear?”  (vs.14).  In other words,  “Saul, the animals you did not kill are noisily contradicting your claim that you obeyed the LORD.”  Now note carefully how, in  vs.15,  Saul does not take responsibility for his disobedience.  He said,  “They have brought them from the Amalekites, for the people spared the best of the sheep and oxen, to sacrifice to the Lord your God; but the rest we have utterly destroyed.” (italics mine).  “We” did the destroying.  But  “the people”  did the sparing.  Now note the trump card : we spared the best to offer a sacrifice (of thanksgiving and worship) to the LORD YOUR God!!

Verses 17-21  repeated for us Samuel’s charge of disobedience against Saul  (“Why did you not obey the voice of the LORD”), Saul’s claim of obedience  (“I did obey the voice of the LORD”),  and Saul blaming the people (“But the people took…”.)  Note the emphatic contrast  :  “I did obey … BUT the people took some of the spoil”.  In other words, “I am the king but I am not responsible for the peoples’ actions.”  And note the replay of the trump card  :  “to sacrifice to the LORD your God.”  After all Samuel, I couldn’t find fault with the people wanting to offer thanks and worship to God for protection and victory.  So, why are you finding fault?  This is like saying,  “I know I am disobeying the Lord, but I am having my personal devotions (Bible reading and prayer).

This brings us to Samuel’s classic reply to Saul in  vss.22-23.  The first point  : obedience to God is more important (“better”) than worship and must precede the worship of God.  God rejects the worship (thanksgiving, prayers, personal devotions) that is rooted in a heart given over to disobedience.  (cf. Psa.66:18).  God rejects the worship that is based upon acts of disobedience.  Psa.24:3  asks,  “Who may ascend into the hill of the LORD?  And who may stand in His holy place?”  The answer is  vs.4  is,  “He who has clean hands and a pure heart, Who has not lifted up his soul to falsehood,  And has not sworn deceitfully.”  The NET Bible translated,  “The one whose deeds are blameless and whose motives are pure.”  Take note of the word  “falsehood”.  It may mean worthless, a lie, or idol.  In  Psa.31:6  the Hebrew word is translated  “vain idols”.  “Who has not lifted up his soul to that which is worthless, a lie, or idolatrous.”  We will see these concepts again.

What motivated the Israelites to disobey the LORD?  It seems clear from  vs.9  that the sin of covetousness motivated the Israelites to disobey the LORD.  (cf. Josh.6:18).  Note the words  “spared the best of”  (vss.9 & 15)  and  “the choicest of”  (vs.21).  They were obviously eyeing the best. (cf. Gen.3:6,  “it was a delight to the eyes”).  After all, why waste such excellent animals by killing them?  Why not take them, use some of them as a sacrifice to the LORD and keep the rest for ourselves?  The covering for their disobedience and covetousness was worship.  Let us take note that in  Eph.5:5  Paul described a covetous man as an idolater.  The implication is that the sin of covetousness is also the sin of idolatry.

Secondly, let us note the nature of disobedience.  Samuel used three words to describe disobedience  :  rebellion, insubordination, and rejection.  Let us examine the various words Samuel used.  Firstly, the word  “obey”  means to hear, understand, and obey.  Without question Saul and the Israelites understood the LORD’S command.  But they refused (“were not willing”) to bring themselves under the LORD’S sovereign authority.  This primary fact of not being willing lies at the heart of all disobedience to God.  God has spoken.  God has made His will very clear.  The disobedient person makes the choice to disobey God.  The disobedient person does not will to obey God.  Jesus made this point in  Jn.5:40  when He said to the Jews,  “you are unwilling (lit. you do not will) to come to Me so that you may have life.”  The disobedient person is simply unwilling (does not will) to obey God.  Jn.3:36  says,  “he who does not obey the Son will not see life, but the wrath of God abides on him.”

This brings us to our second word,  “rebellion”  which reinforces what we just saw.  Rebellion most often describes a determined refusal to obey the commands of the LORD.  Saul and the Israelites knew what the LORD’S command required of them.  But they determined to do differently in keeping with their own desires.  They replaced God’s will and authority with their own will and authority.  (cf. Isa.53:6).  God’s said  “utterly destroy”;  they said  “sacrifice to the LORD” (worship).  Thirdly, the word  “insubordination”  describes rebellion rooted in arrogance.  It was an act of sheer arrogance for the Israelites to know what the LORD commanded and to do differently under the guise of worship.  This was the covering of a rebellious and covetous heart with outward acts of piety.  Jesus described this as  “vain worship”  (cf. Matt.15;7-9).

Fourthly, the verb  “reject’  also means to despise, to abhor.  The primary meaning of this verb is to reject or treat as loathsome.  In  1Sam.10:19  Samuel charged Israel,  “you have today rejected your God.”  Jer.8:9  says,  “Behold, they have rejected the word of the LORD”.  Lev.26:14-15 says,  “if you do not obey Me … if, instead, you reject My statutes, and if your soul abhors My ordinances.”  In this Leviticus passage three different verbs are grouped together to emphasize the nature of the sin of disobedience  :  “not obey … reject … abhors.”  The LORD is saying that to reject His word is to despise His word and treat it as loathsome. I want you to note the irony in the variety of the language used.  Vs.9  says the people utterly destroyed everything that was  “despised and worthless”.  But by rejecting the LORD’S command  (vs.23), they despised the word of God and treated it as worthless.

Fifthly, “divination” was the cultic practice of pagan nations and rooted in idolatry.  Note the warning in  Deut.18:10-12,  “There shall not be found among you anyone who makes his son or his daughter pass through the fire, one who uses divination, one who practices witchcraft, or one who interprets omens, or a sorcerer, 11 or one who casts a spell, or a medium, or a spiritist, or one who calls up the dead. 12 For whoever does these things is detestable to the Lord.”  1Kings 17:17  describes these sins as  “doing evil in the sight of the LORD, provoking Him.”  Samuel’s statement tells us that the determined refusal to obey the LORD’S commands is equal to the practice of divination.

Sixthly, “iniquity” has the primary meaning of emptiness and vanity  (cf. Prov.22:8a  “vanity”).  The Hebrew word was used to describe empty or futile pursuits.  This Hebrew word is used in  Isa.66:3 for  “idol”  and strongly conveys the futility of worshipping an idol which is in fact, nothing or vanity.  In  Isa.66:3  the LORD condemned Israel’s hypocritical worship and said,  “He who burns incense is like one who blesses an idol.”  Blessing an idol is an iniquitous act of futility.

The disobedience of Adam and Eve was the pursuit of futility. The serpent promised,  “you will be like God, knowing good and evil.”  (Gen.3:5).  They coveted and reached for divinity but received depravity.

Lastly, “idolatry”.  We have already seen that  “divination”  and  “iniquity”  point to idolatry.  This sixth word usually refers to teraphims (household idols) that were worshiped and used in the practice of divination.

1).  Disobedience is a choice of the will.

4).  Disobedience is the pursuit of futility.

5).  To disobey God is to reject and despise God and His word.

Why is disobedience idolatry?  Disobedience replaces God with you or with the person(s) advising you.  Adam and Eve replaced God with the serpent (devil, Rev.12:9).  Disobedience is idolatry because it replaces God’s sovereign will and authority with your own will and authority.  Idolatry is forbidden in the very first commandment (Exod.20:1-3).  And the LORD has warned in  Isa.42:8,  “I am the LORD (Yahweh), that is My name;  I will not give My glory to another, Nor My praise to graven images.”