The Wrongs of Rights in The Homosexual Movement 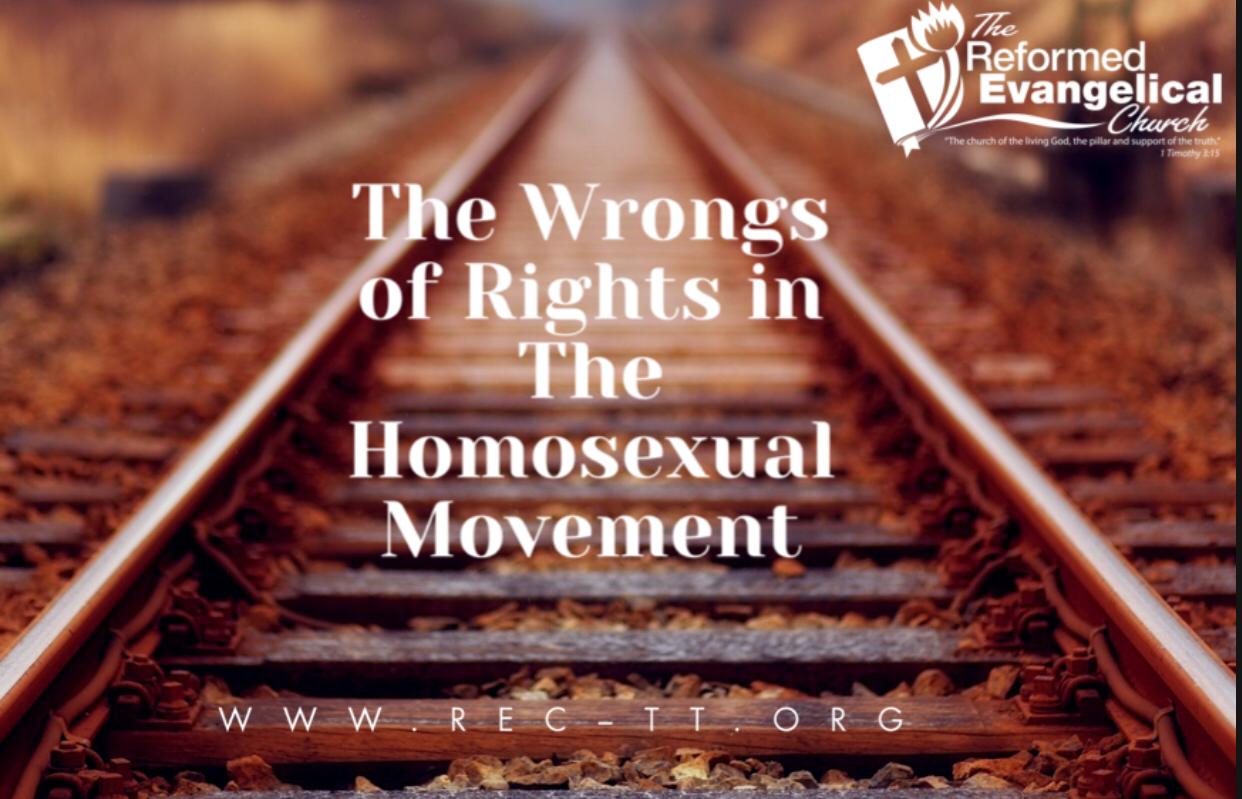 Before we get into the meat of the matter, I must make a few things clear. The term “rights” is used in the title to refer to the concept of human rights. Human rights refer to the consensus of arbitrarily derived morals and standards of human behaviour that are protected by law. What is wrong with these rights is that men have created them. Men are reaching for privileges and standards that were not given to them. This reaching looks very similar to what happened in the Garden of Eden. Adam suppressed the truth and embraced lies to benefit himself. Adam sinned because he reached for a standard that was not given to him.

In the present day, sin shows itself through the global embrace of relativistic thought which is the result of post-modern philosophy popularised by academic elites. These philosophies built the foundation and provided traction for the sexual revolution that has taken place in the western world. Part of this foundation is the cultural shift from moral argumentation to the popular “rights talk” that presently pervades the public’s consciousness. Moral debates, whether about marriage and sexuality or abortion, are reduced to arguments about individual rights bolstered by politically correct speech. We often hear about “the right to choose”, the “right to sexual preference”, or the “right to do whatever I want to do”. Morality has been reduced to competitions about my right, his/her rights and their rights. This brings us to the Homosexual Movement. This movement has used this “rights talk” concept to blur the lines of moral interpretation to achieve their goals.

The Homosexual Movement in the United States has succeeded in legitimising homosexuality as an acceptable lifestyle by focusing on several key areas. This effort has secured special privileges for homosexuals as a legally protected class of people. Anti-sodomy laws have been repealed. The recognition of homosexual partnerships on par with heterosexual marriage has been achieved. And the barriers to homosexuals in the military, academy and the church have been largely removed. A major way in which the Homosexual Movement in America achieved this was to organise itself as a liberation movement based on the idea of emancipation from a form of oppression. This thinking has its roots in Marxism. To help achieve their goals of “liberation”, the Homosexual Movement also identified itself with other liberation movements such as the Civil Rights Movement.

The Civil Rights Movement was concerned about securing for African Americans equal access to opportunities and the basic privileges and rights afforded to the American citizen. Some argue whether these goals have been fully achieved but one cannot deny the change that is evident today in America concerning these rights now afforded to Blacks. Their fight, put simply, was to be treated as human. The Civil Rights Movement was based upon this premise. No debate is necessary to determine whether the oppression Blacks experienced then was right or wrong. To treat a human being without dignity is wrong even when laws enforce such.

It is on this basis that I address the deception in the Homosexual Movement’s strategy. The Civil Rights Movement based their claims on their humanity; the homosexual movement cannot do the same. Yet they have fooled many and have gained the sympathy of so much more by employing this very tactic. Homosexuals are human beings. That is not in dispute. It is their lifestyle that is in question not their humanity. It is a lifestyle which stands contrary to God, His word and His created order. It is sin. Painting sin in “rights talk” will never make it right.

To the Church in Trinidad and Tobago, it is not a time to be confused, ignorant or passive about what is happening in our world and in our society. It is time to be proactive and not reactionary. It is our duty to love people by pointing out the lies in the Homosexual Movement. Since it is our duty to love people, we must employ the ultimate expression of this love by guiding the lost to God through the Gospel. It is imperative that we be knowledgeable not only of the strategies that were used by the Homosexual Movement, but also of the scriptures. We must stand for the truth uncompromisingly, holding a sign post to the door of Kingdom that some might run in.